I am an ITC Fellow working at the Institute for Theory and Computation at the Center for Astrophysics, Harvard & Smithsonian. I received my PhD from the University of Heidelberg in November 2020.

The over-arching goal of my research is to understand the cycle of star formation across the wide variety of galactic environments in our Universe. To this end, I use a combination of analytic theory and numerical simulations to study the connection between the large-scale properties of galaxies and the evolution of the molecular gas reservoirs in which stars form. 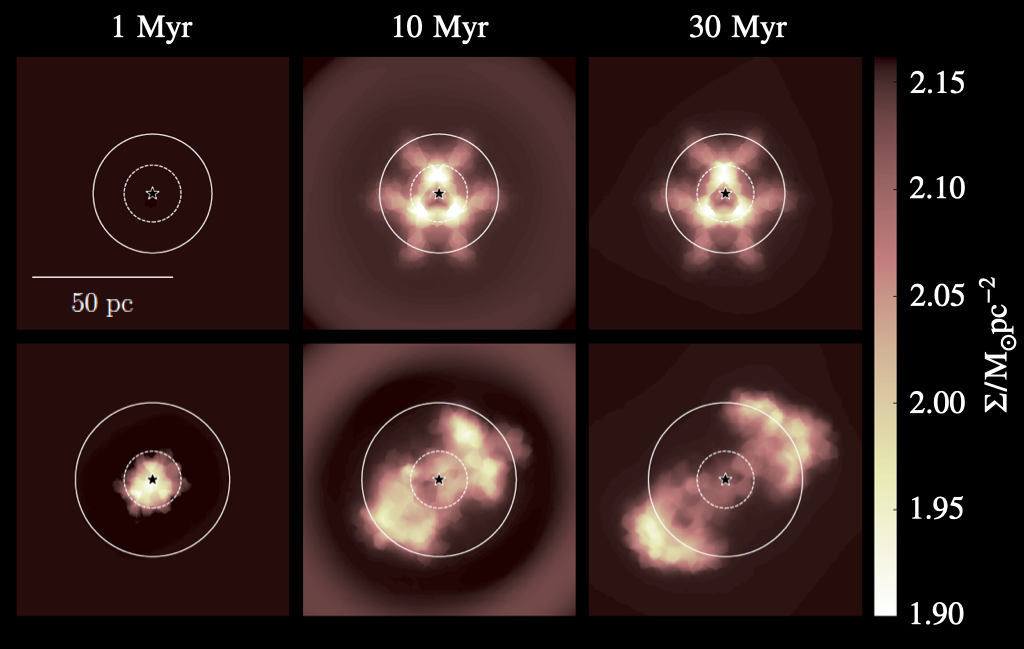 We present a novel and physically-motivated sub-grid model for HII region feedback, within the moving-mesh code Arepo. The model accounts for both the radiation pressure-driven and thermal expansion of the gas surrounding young stellar clusters. Our results highlight the substantial effect that the numerical stellar feedback prescription has on simulations of the interstellar medium. The introduction of explicit radial momentum injection from HII regions halves the average lifetimes of the least-massive molecular clouds, and decrease the mass-loading of galactic outflows by more than an order of magnitude.


A scaling relation for the molecular cloud lifetime

Using the high-resolution simulations of Jeffreson et al. 2020, we study the time evolution of molecular clouds identified across a range of spatial resolutions, from 10 parsecs to 1 kiloparsec. At resolutions smaller than the gas disc scale-height, the cloud lifetime obeys a power-law scaling relation to the -0.3 power of the cloud size. The scaling relation is consistent with over-densities that collapse, form stars and are dispersed by stellar feedback. 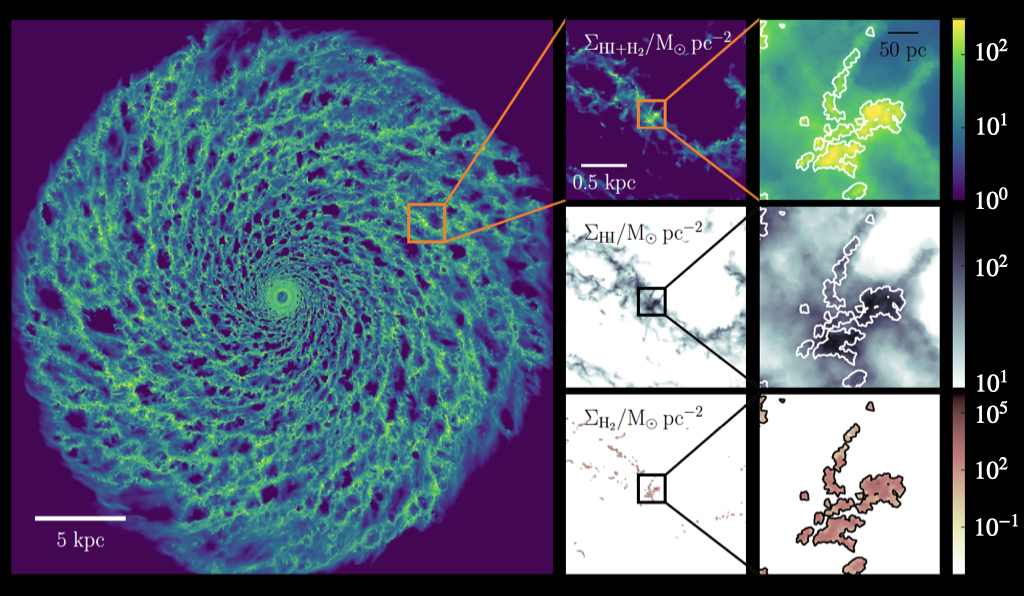 We perform three high-resolution simulations of Milky Way-like disc galaxies with the moving-mesh hydrodynamics code Arepo, designed to span a wide range of galactic-dynamical environments. They collectively yield a statistical sample of ~80,000 giant molecular clouds and ~55,000 HI clouds. We find that the rotational properties of the giant molecular clouds are correlated with the large-scale dynamical environment, while the gravo-turbulent and star-forming properties of the clouds are decoupled from galactic dynamics. 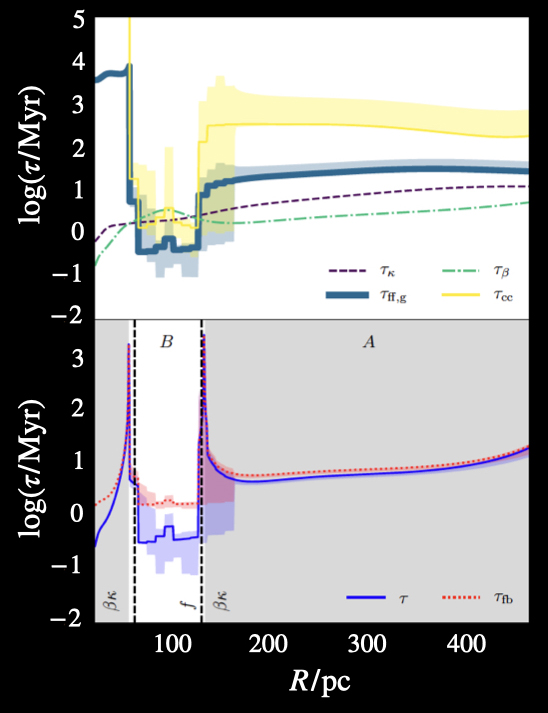 We apply the analytic theory of Jeffreson et al. 2018a to the Central Molecular Zone of the Milky Way. The theory predicts that cloud evolution is dominated by gravitational collapse in the `100-pc stream', producing median cloud lifetimes between 1.4 and 3.9 million years.


A general theory for the lifetimes of giant molecular clouds 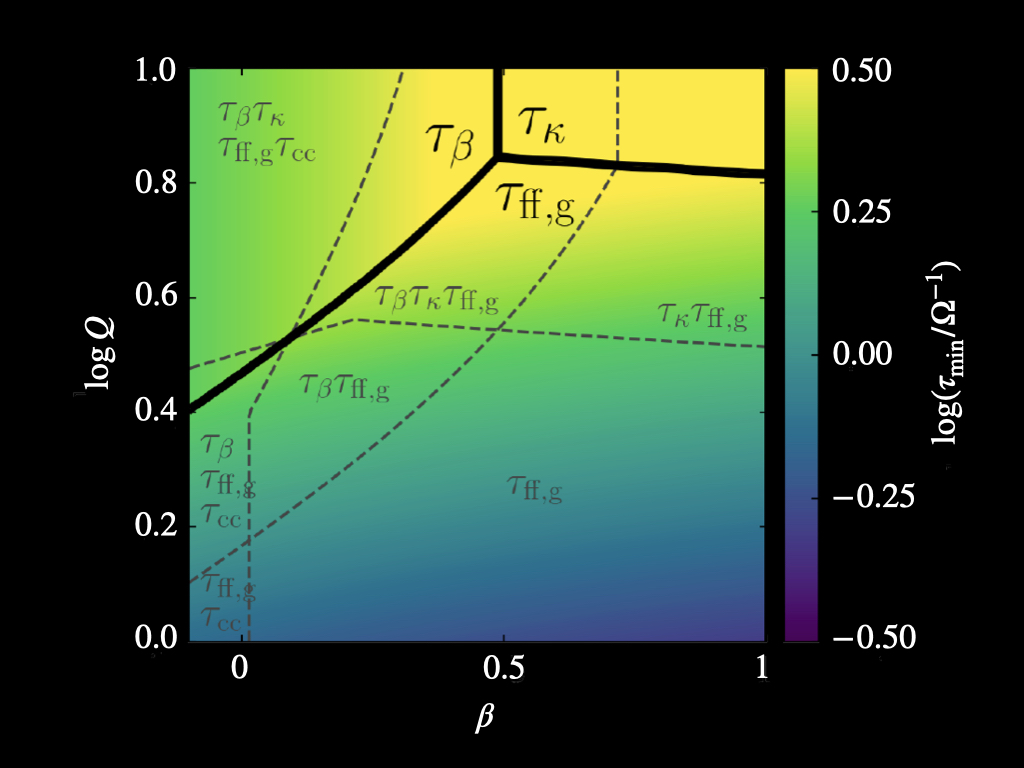 We propose a simple analytic theory for the lifetimes of giant molecular clouds under the influence of large-scale galactic-dynamical processes. Within this theory, the cloud can be derived from measurements of the galactic rotation curve, the gas and stellar surface densities, and the gas and stellar velocity dispersions of the host galaxy. The theory can be tested via direct observations of CO emission, with e.g. the Atacama large millimetre/submillimetre array.